One f the key effects of global warming is the temperature we see on a day-to-day basis. The gas we emit into the atmosphere creates a barrier, which holds the heat in. Some of the suns rays gets through that barrier, and some of it bounces back. Of course, we in Shropshire may not directly cause the results of global warming. So we may well “zone out” when people tell us that disaster will result. Many people in the world also deny that climate change is happening.

In the UK we have seen in June 2022 that we had record temperatures. Its hottest temperature was recorded of 40.3C Coningsby in Lincolnshire, according to provisional Met Office data. It beat the previous record of 38.7C seen at Cambridge Botanic Garden in 2019.

Heathrow and St James Park in London were close behind with temperatures of 40.2C. The results have been catastrophic – fires in London, railways closed down because of rails bending, airports closed because of tarmac melting, roads closed for the same reason. Old people have suffered in the heat in care homes. In Portugal temperatures have risen to 46C. Again that has led to fires and difficulties.

But Shropshire’s 32 year old has been recorded. The previous record from 1990 of 34.9C was smashed at RAF Shawbury with a temperature of 35.7C. Some schools were shut. Trains did not run at all. Gritters were out sanding the melted roads.

Even worse it looks like there is an upwards trend for the hottest days – and there have been more of them in recent years, as the following graph shows:

The science shows that we can expect fires to occur as forests and grasslands get dry in the heat, and a spark then sets off a fire, which spreads rapidly. We have seen horrendous pictures of the fires across the world.

Take a look at this picture from the fires in California in 2020. 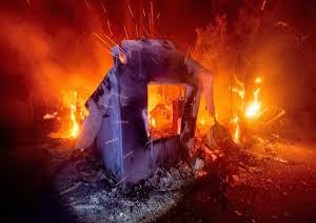 The recent high temperatures in July 2022 saw fires in London. Even in Shropshire, we have had fires on the hills. Take a look at the dramatic video produced by David Attenborough by clicking on the following button

Climate change creates a blanket in the atmosphere, which will lead to heavier rains that come down from the mountains and cause floods through rivers that cannot manage the water. Of course in Shropshire we have seen the Severn flood several times, which causes disruption all the way along the Severn, particularly in towns like Shrewsbury, which shuts off huge areas of Shrewsbury, and in Ironbridge as the river climbs up to close the shops and roadways. Higher floods are happening more frequently, causing loss of business, and major disruptions.

Go to the following news item to see the problems with the floods in Ironbridge:

Even worse are the floods in Africa, which cause huge disruption, famine, and hunger. Look at this video from VOA News from 2019. Yes, Africa is a long way away. But we should not forget about the impact that climate change will have on the continent.

Famine across Africa will not only mean the loss of life, but also mass migration as people leave their countries to find other places where they can live, earn money and survive.

The increased temperatures have meant that global sea levels have been rising. The average Sea level has risen 8–9 inches (21–24 centimetres) since 1880. The rate of sea level rise is also accelerating: it has more than doubled from 0.06 inches (1.4 millimeters) per year throughout most of the twentieth century to 0.14 inches (3.6 millimeters) per year from 2006–2015. This has meant the complete obliteration of islands within the Solomon Islands group. In the UK it means continued erosion of the coastline.

The major impacts of sea level rise occur during high tides and storms, causing flooding along coastlines and estuaries. In 2018 the Climate Change Committee (CCC), the UK Government’s independent advisers on climate change, said that by the 2080s in England, “up to 1.5 million properties, including 1.2 million homes, maybe in areas at a significant level of [coastal] flood risk”.

The Climate Emergency is rapidly having dramatic effects on all our lives, which is why it is an emergency to fix the problems we create by putting too much water into the atmosphere. The best analogy is illustrated by the danger of having the taps running in the bath upstairs in the bathroom, where the water is coming in faster than it is going out of the plug hole. If we do not stop the taps the water will flood over the edge, bring down the ceiling, and cause untold damage to the rooms below. If we found this happening at home, we would immediately save the taps. But at the moment it feels like we are not at home, and the water will just flood over the edge.