Today we use our cars freely for short or long journeys. Most cars are powered today by either petrol or diesel. The alternative is either to use a “Hybrid Car”, which uses a mixture of carbon fuels and electricity, or “pure” electric. The major constraints on electricity are the availability of electric charging points and the distance which they can on one charge (between 200 and 250 miles). But the cost comparisons between a petrol car and an electric car as provided by Thatcham Research show that the total cost per mile is cheaper for an electric car. 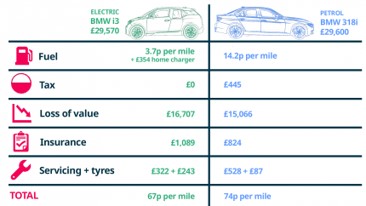 Planes are especially high contributors to the output of Carbon Dioxide. They also cause problems with the gases they emit at high altitudes. People often think that travelling in Europe is much faster if you travel by plane. But in fact, with delays in security and passport control, the difference may not be so great. But when you look at the impact of train v plane in terms of carbon emissions, it must make sense to think about using the train more often. The following table compares: